Phoenix is a Rare Element in Elemental Battlegrounds. It has a color palette of mystical blue/purple shades, as well as black, white and bright orange.

Phoenix, like Fire, Lava and Plasma, uses burn damage to wear down an opponent, but also having strong spells, healing capabilities, and high combo potential.

It is a purchasable element that costs 750 Diamonds. Its fast and strong and will provide high damage with quick escapes. 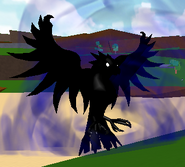 Phoenix during Immolate
Add a photo to this gallery
Retrieved from "https://roblox-elemental-battlegrounds.fandom.com/wiki/Phoenix?oldid=55800"
Community content is available under CC-BY-SA unless otherwise noted.